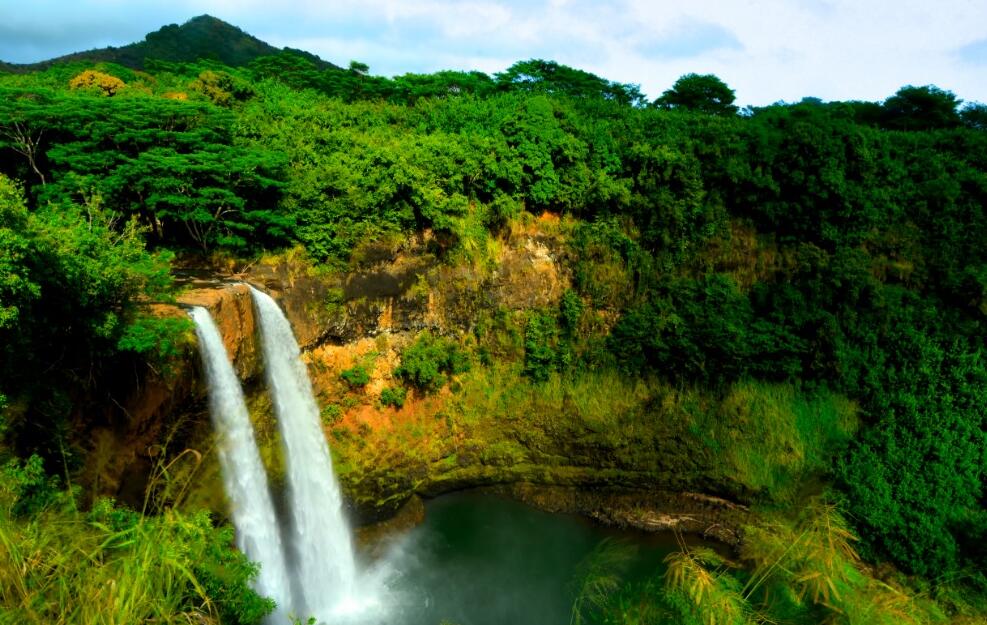 Kauai, Hawaii is one of the most beautiful and greenest islands of the Hawaii group.

According to A2zdirectory, Kauai, Hawaii is one of the most beautiful and greenest islands of the Hawaii group. Because of the many waterfalls and the green interior, the island is also called the Garden Isle. Kauai also has a very rugged coast and an impressive canyon called the Waimea Canyon. No wonder Steven Spielberg filmed parts of the movie Jurassic Park here. You don’t want to miss this island during your fly drive Hawaii, Hawaii tour or Hawaii honeymoon.

16 places of interest on Kauai

Kauai is great to discover in a few days, you can visit the Kōkeʻe State Park and the adjacent Waimea Canyon, visit some of the many waterfalls (there are a few hundred!) or discover the rugged coast.

One of the fun things to do is a helicopter tour above the island. There is no better way to discover the most beautiful island in the sky. Kauai offers the most extreme and diverse nature of all islands. It is precisely from the air that you can best observe this nature. The best (and most expensive) is to rent a private helicopter and then fly over the island for an hour. These helicopters often have open doors so that you can take beautiful pictures. The highlight is often a 360 degree rainbow over the Napali coast.

When you are on a road trip through Kauai you pass hundreds of waterfalls, deep canyons, green mountains and the most beautiful beaches. The island is about 45 km wide. It would be a bit crazy to cover the island in 1 day, it’s just too big. If you have a few days you can split the island into 2 parts and do 1 day on half of the island. If you really want to take it easy, you can do this trip over several days, taking every opportunity to get out of the car and enjoy the many great experiences.

Waimea Canyon, on the west side of Kauai, has been described as “The Grand Canyon of the Pacific.” This Canyon is not as old and deep as its cousin in Arizona, but can certainly be called very unique on the islands of Hawaii. The Waimea Canyon Lookout, which is 14 miles long, 1 mile wide and more than 3,600 feet deep, offers panoramic and canyon views of rugged rocks and deep valleys. The main road, Waimea Canyon Drive, leads you to a lower overlook and the main Waimea Canyon Overlook, which offers sweeping views of Kauai’s dramatic interior. The road continues into the mountains and ends at Kokee State Park. There are numerous trails to traverse for beginners and experienced hikers alike.

Kōkeʻe State Park is without a doubt one of the most beautiful places on Kauai. As soon as you enter the park you immediately understand why the island is known as Garden Island.
The mountains here are bizarrely green and you have a magnificent view of the Kalalau Valley and the world-famous Na Pali Coast. The park can also be visited for free and you can make the most beautiful hikes and walks here.

Ná Pali Coast is located on the northwestern coast of Kauai. Mountains plunge more than 3,000 feet into the sea in this part of Hawaii. This coast is seen as the most rugged and dramatic coast of Hawaii, steep rugged cliffs end here in the blue sea.
This famous coast is 23 km long. Many people come here to walk the famous Kalalau Trail. This trail is the only trail you can follow to see the entire park. You will trek here through lush valleys and at the end you will reach Hanakapi’ai Beach. Nāpali Coast State Park is a true traveler’s paradise, albeit less easily accessible at times.

West of Princeville, on Kauai’s north shore, lies the peaceful town of Hanalei. Blessed with timeless beauty, this lovely town is home to everything from historic sites to contemporary art galleries. Hanalei Town is a memorable stop on your visit to Kauai. Visit the Waioli Mission House and step back into Kauai history. Browse Hanalei’s art galleries for Kauai-made art and carvings made from rare, native Hawaiian forests. Locals and visitors flock to Hanalei for ukulele concerts at the Hanalei Community Center, a regular event in Kauai.

Lihue is the island’s governmental and commercial center, as well as a cultural and historical area. This is arguably the most visited city on Kauai, as it is home to Kauai’s main airport (Lihue Airport) and the Port of Nawiliwili, the island’s main commercial shipping center and cruise ship port.
Lihue has a variety of natural wonders to explore. Kalapaki Beach is home to the Kauai Marriott Resort and Beach Club and the Hokuala Golf Resort. Bodysurfing, SUP, surfing and swimming make Kalapaki a popular destination. Ninini Beach is home to an automated lighthouse, in operation since 1897. And just north of Lihue, don’t forget to stop at the Wailua Falls Lookout for great views of the falls.

Kawaikini is the highest point on the Hawaiian Island of Kauai and in the province of Kauai, measuring 5,243 feet in elevation. It is the summit of the island’s inactive central shield volcano, Mount Waialeale.

Hanakapiai Falls or Hanakapi’ai Falls is an approximately 300-foot tall waterfall in Hawaii, on the Na Pali side of the island of Kauai. It requires a walk of about 2 miles from Hanakapi’ai Beach. The waterfall is described as “beautiful but challenging”

Brennecke Beach is a very popular boogie board beach that is directly adjacent to Poipu Beach Park. With a consistent and reliable beach holiday, Brennecke is probably the best boogie and body boarding location on the South Coast for tourists. The waves are at their biggest during the summer months. The break at Brennecke can be rough even in small surf, so novice boogie boarders should take extra care. Surfing is not allowed on this beach. The sandy section of the beach is small, but a nice place to sit and supervise children in the water.

On Kauai’s south shore, you’ll find the spectacular Spouting Horn Blowhole, one of the most photographed spots on Kauai. A legend says that this coastline was once guarded by a giant moo (lizard) named Kaikapu. Everyone was afraid of the moo because it would eat anyone who tried to fish or swim in the area. One day, a young boy named Liko went into the ocean to outsmart the lizard. Kaikapu attacked him, but Liko stuck a sharp stick in her mouth, swam under the lava shelf and escaped through a small hole to the surface. The moo followed Liko and got stuck in the lava tube. To this day, you can hear the lizard’s roar and watch her breath squirt out of the blowhole.

On Kauai, 22,000 acres of former sugarcane land was converted to coffee in 1987 by the Kauai Coffee Company. Damage from Hurricane Iniki in 1992 destroyed much of the crop, but by 1996 annual crops equaled that of the Kona Coffee Belt. The Kauai Coffee Company now grows 100 percent Kauai Coffee using five varieties of Arabica coffee beans on the largest coffee farm in the United States.

The tranquil Wailua River weaves past beautiful waterfalls and lush jungle landscapes along the east side of the island. Kauai has the only navigable rivers in Hawaii and the Wailua River is the largest.
The 20-mile river, which once ran through the settings of seven different heiau (temples), flows from the 5,148-foot Mount Waialeale in the center of the island. The Wailua River feeds two popular and accessible waterfalls: Opaekaa Falls and Wailua Falls. The scenic river itself can be explored by kayak, SUP or canoe, and a boat tour is also available. Open-air boats also offer tours of the Fern Grotto, a natural lava rock cave sheltered by draping ferns. This romantic area is a popular wedding venue. Also look for the Nounou Mountains (Sleeping Giant), a formation on a ridge between Wailua and Kapaa that looks like a human figure lying on its back.

Kōloa was one of the first sugar towns, where families and enterprising merchants established their roots and built a new way of life with many cultures, a hallmark of present-day Hawaii! Kōloa celebrates this heritage every July, during a week-long Kōloa Plantation Days festival, and we invite you to visit at any time of the year

Often hailed as the most beautiful area in Hawaii, these gardens are a paradise for photographers and nature lovers. With over 2500 species of tropical plants from around the world, an orchid garden, a macaw aviary and an oceanfront walk.
The National Tropical Botanical Garden is dedicated to conserving tropical plant diversity and countering the tide of extinction – through exploration, plant propagation, habitat restoration, scientific research and education. NTBG’s gardens and reserves are safe havens for endangered species that would otherwise disappear forever.

Kilauea Point National Wildlife Refuge was established in 1985 by the U.S. Fish and Wildlife Service and is characterized by its towering lighthouse. The ocean bluffs and high grassy slopes of a dormant volcano provide a protective breeding ground for many Hawaiian seabirds.

It is also one of the few locations where you can observe the ʻĀ (Red-footed Booby), Mōlī (Laysan albatross), ʻUaʻu kani (Wedge-tailed Shearwater), and other Kauaʻi animals in their pristine natural habitat. The coastal front also provides a safe haven for the endangered ‘Ilio-holo-i-ka-uaua (Hawaiian Monk Seal), Honu (Green Sea Turtle), and Kohola (Humpback Whale). 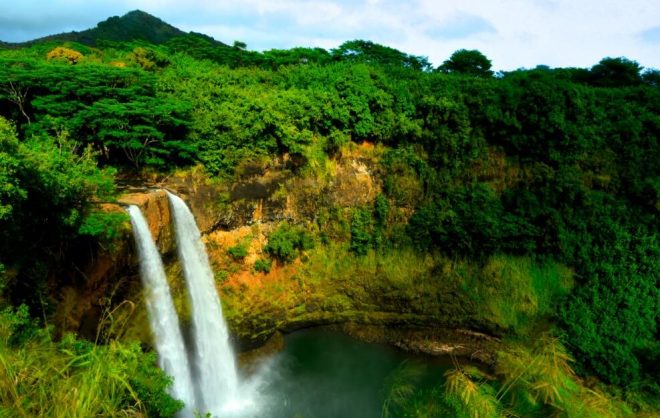