What is the capital of Arkansas?

The state of Arkansas is located in the southern part of the United States, in their central area. It borders six states, namely Louisiana, Mississippi, Missouri, Oklahoma, Texas and Tennessee. Arkansas became the official state of the United States in 1836 and its capital is Little Rock.

In the area of ​​today’s state of Arkansas, both the Spanish and the French influenced the original colonizers in the 18th century. Napoleon Bonaparte then sold French Louisiana (including Arkansas) to the United States in 1803. In 1819, the Territory of Arkansas was established, and Arkansas subsequently applied for official designation by the United States. It was approved in 1836.

In the American Civil War, Arkansas sided with the Confederacy after initial hesitation, and several battles took place in the state; however, support for the Confederacy among the people of Arkansas gradually waned. Despite the abolition of slavery after the Civil War, the question of the status of African Americans, as in other southern states, was very sensitive. Segregation in schools and transportation systems operated in Arkansas until the 1950s.

Arkansas can be geographically divided into two halves – while the north is made up of several temperate mountains with higher altitude, the south is lowland. Humid subtropical weather prevails here; even though Arkansas is not located directly on the Gulf Coast, it still feels moisture from the sea. Arkansas thus has hot, humid summers and mild and rather dry winters. In summer, the temperature regularly rises above 30 degrees Celsius, while the highest daily temperatures in winter reach about 10 degrees with mild night frosts.

Historically, Arkansas is considered a poor state. In the past, it was an agricultural area with large cotton production. Gradually, Arkansas is trying to diversify its economy, but agriculture still remains an important part of the economy – Arkansas is America’s largest producer of rice and poultry meat.

The largest and also the capital of Arkansas is Little Rock with about 200,000 inhabitants. Other major cities include Fort Smith and Fayettville.

The capital of Arkansas – Little Rock

The name was given to the town by the French traveler Benard de la Harpe as early as 1722, when he sailed along the Arkansas River to a small rock formation, which he called Little Rock. Residences were gradually established in its vicinity, and in 1821 Little Rock became the capital of the then Arkansas Territory. It was not until 1831 that Little Rock was officially declared a city.

Little Rock is located in the central part of the state on the Arkansas River. The area has a humid subtropical climate with very warm summers and mild winters. Summer temperatures in Little Rock rise regularly above 30 degrees Celsius with extremes even ten degrees higher. The coldest month is January, when the average lowest temperature drops below freezing.

There are several highways to Little Rock, the most important of which are Interstate 40 from the west to the east and Interstat 30 to Dallas, Texas. 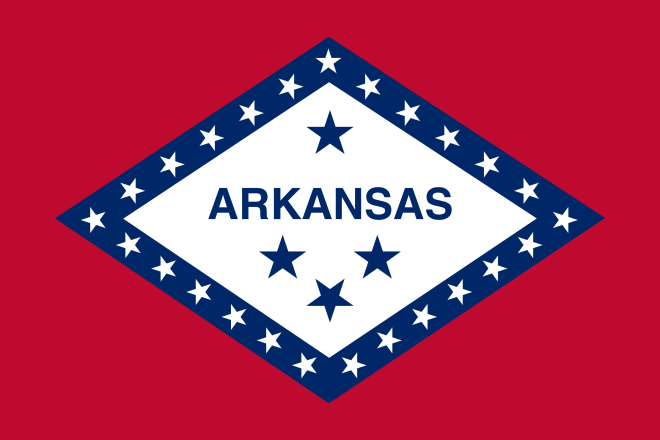 The flag of the state of Arkansas was adopted in 1924.