What is the capital of Indiana? 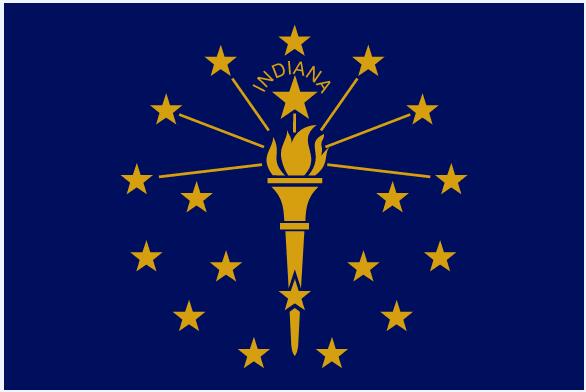 Indiana became a US state in 1816 as the 19th state in a row. It is located in the north of the USA in their central part in the Great Lakes region. It borders four other states – Illinois, Kentucky, Michigan and Ohio. The capital and largest city of Indiana is Indianapolis.

The area of ​​present-day Indiana was first inhabited by the French in addition to the natives; very soon, however, the French settlers began to fight with the British, and after the Seven Years’ War, in 1763, the territory fell to Great Britain. After the creation of the United States, today’s Indiana was part of the so-called Northwest Territories, from which the Indiana Territory (Indiana Territory) was created in 1800 after the annexation of Ohio. Michigan and Illinois were later removed from it, creating the borders of today’s state of Indiana. In December 1816, Indiana became the official state of the United States.

Indiana is located in the central part of the United States in the Great Lakes region. It is not vertical rugged, the highest point of the state has an altitude of 383 meters. There is a humid continental climate with warm summers and cold winters with heavy snowfall. The highest average summer temperatures reach 30 degrees Celsius, while in winter the lowest average temperatures fall in the north of the state to -10 degrees.

Indiana is an industrial state and excels especially in steel production, in which it is one of the largest producers among the American states.

Indianapolis is the capital of Indiana and with more than 800,000 inhabitants is also the largest city. Other major cities in Indiana include Fort Wayne with 250,000 and Evansville with 120,000 residents.

The capital of Indiana – Indianapolis

The first capital of the state of Indiana was Corydon, but the site of today’s Indianapolis was chosen as the future capital because of its central location and connection to the river system. The city was founded in 1821 and four years later formally became the capital of Indiana.

The climate in Indianapolis is humid continental and is characterized by warm and humid summers and cold winters with frequent snowfall. The average highest daily temperatures reach almost 30 degrees Celsius in the summer, while the average lowest drops in January 6 degrees below freezing.

The flag of the state of Indiana was adopted in 1917.