What is the capital of Mississippi? 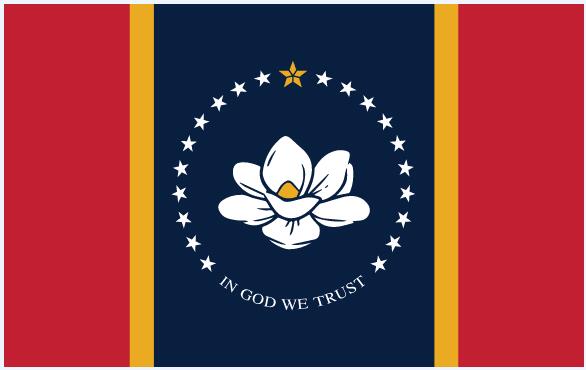 The state of Mississippi became the official state of the United States in 1817 as the twentieth in a row. It is located in the southern United States on the Gulf Coast and borders four other American states – in the east with Alabama, in the north with Tennessee and the western border with Arkansas and Louisiana. The capital and largest city of the state is the city of Jackson.

The first Europeans arrived in the area of ​​today’s state of Mississippi in the first half of the 16th century, but the first permanent settlements of colonists began to emerge here at the turn of the 17th and 18th centuries. In the following years, the territory was administered by various powers – the Spaniards, the French and the British. After losing the Seven Years’ War, France ceded the territory to Britain, which, however, did not rejoice in the spoils for long, because after the creation of the United States, the territory became part of this newly created state; in April 1798, the territory of Mississippi was created. In 1817, Mississippi became the official state of the United States, as the twentieth in a row. During the Civil War, Mississippi stood as a typical Confederate slave state and became a member of the Union back in 1870.

The Mississippi lies in the southern United States and is dominated by the river of the same name, which forms the entire western border of the state. It is a slightly hilly state with the highest point at an altitude of 246 meters.

Mississippi’s climate is characterized as humid subtropical and is characterized by long hot summers and short and mild winters. While summer temperatures do not differ much within the state (average peak temperatures reach 33 degrees Celsius in summer), in winter the south of the state is relatively warmer (peak temperatures in winter are 10 degrees in the north while on the coast about 6 degrees more). Also, precipitation is significantly more frequent in the south near the Gulf of Mexico; Mississppi is also prone to frequent storms and hurricanes.

Mississippi is traditionally one of the most rural states in the United States, where agriculture has always played a significant role. The production of cotton is still important, as well as rice and soybeans, and poultry farming and fishing are an important component of animal production. There are rich deposits of oil and natural gas, thanks to which the downstream industry – especially chemical – has gradually developed.

The capital and largest city of Mississippi is the city of Jackson, which is located in the central part of the state and has about 175 thousand inhabitants (in total, with the surrounding suburbs, about 600 thousand).

The flag of the state of Mississippi was adopted in 1894.

The capital of Mississippi – Jackson

The capital of the state of Mississippi is the city of Jackson. It is located in the central part of the state and is also its largest city with about 170,000 inhabitants.

The area of ​​present-day Jackson was first inhabited by Louis LeFleur, and the village became known as LeFleur’s Bluff. However, it did not begin to develop until the 1920s. In 1821, a year after the establishment of the Mississippi by an official state of the United States, it was decided that the capital should be located as close as possible to the center of the state. Given that there was a swamp in the very center of the state, the decision was finally made on LeFleur’s Bluff. The city was subsequently named after former US President Andrew Jackson.

During the American Civil War, Jackson was one of the main centers of the Confederacy. Several battles took place in and around it, and in 1863 the Union’s military forces had the city burned down.

The most important monuments in Jackson include the governor’s residence built in 1839 or the town hall, which was used as a hospital during the Civil War.