What is the capital of New Hampshire? 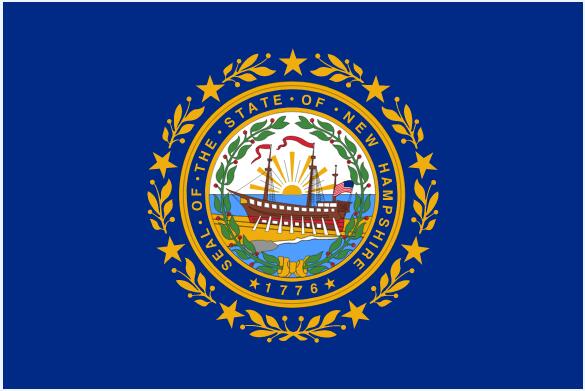 The region in the northeast of today’s USA was settled in the early 17th century. The province of New Hampshire was founded in the late 1920s, but there were constant disputes with the Massachusetts side colony for a century; for a long time, these colonies were also administered together. New Hampshire was one of thirteen colonies that revolted against British rule during the American Revolutionary War. New Hampshire became the official state of the USA in 1788 after the ninth ratification of the United States Constitution.

New Hampshire is located in the northeastern part of the United States in a region called New England. It is one of the smallest states in the USA (46th in order), but it is still geographically interesting. There are several mountain ranges in upstate New Hampshire, such as the White Mountains, with the highest point of Mount Washington at 1917 meters above sea level. New Hampshire is a coastal state, but its coast is the shortest of all the coastal states of the USA (only 29 kilometers).

The climate in the state of New Hampshire is characterized as a humid continental with warm and humid summers and cold winters; the precipitation is distributed relatively evenly throughout the months of the year. The climate in the southeastern part of the state is influenced by the nearby ocean, which eases temperatures in both summer and winter. Winters can be very harsh in New Hampshire, especially in the western part of the state and in the mountains, where temperatures drop to -20 degrees Celsius at night.

From an economic point of view, tourism is very important, in the summer, the beaches on the Atlantic coast are the object of interest for tourists, and in the winter, the ski resorts in the mountains. Logging and the related paper industry have a long tradition here; the mountain profile in the northern part of the state then limits agriculture, which is not very widespread here.

The capital of New Hampshire is Concord, which is located in the middle of the state and has about 40,000 inhabitants. The largest economic center is the city of Manchester with more than 110,000 inhabitants.

The flag of the state of New Hampshire was adopted in 1931.

The capital of New Hampshire – Concord

The capital of the state of New Hampshire is the city of Concord, which is located in the central part of the state and was founded in 1734; today it has about 40,000 inhabitants.

The area of ​​today’s city of Concord was inhabited by indigenous tribes of Indians long before the arrival of Europeans. The first ever European settlement originated here in the 1920s. In 1734, a town called Rumford was founded here, which was renamed Concord in 1765.

During the 18th century, the city developed successfully and thanks to its location in the central part, after the creation of the state of New Hampshire, it became a natural candidate for the capital, which also happened in 1808.

The climate in the region is characterized by humid continental – long and cold winters, when night temperatures drop to an average of -12 and daytime temperatures do not rise above freezing, and very warm and often humid summers with average peak temperatures around 28 degrees Celsius. Precipitation is relatively common throughout the year.