What is the capital of New Mexico? 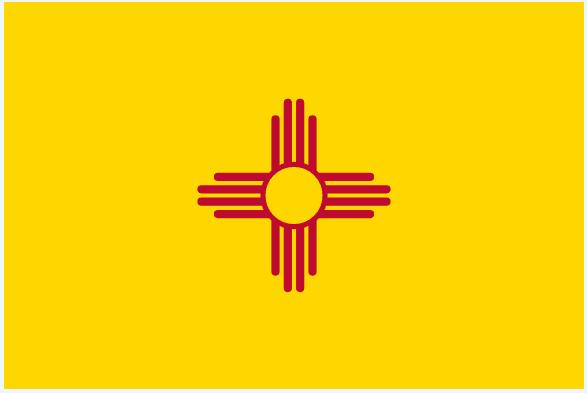 The state of New Mexico is located in the southern United States on the border with Mexico. It became the official state of the USA in 1912 as the 47th in order. In addition to Mexico, New Mexico borders five other US states – Texas and Oklahoma in the east, Colorado in the north , shares the western border with Arizona , and has a common point in the northwest with Oklahoma. The capital of the state of New Mexico is Santa Fe.

The area of ​​today’s New Mexico has been inhabited by indigenous people for many years. At the time of the first contacts with European civilization, mainly Navajo and Apache tribes lived here. Europeans, specifically Spaniards, penetrated here as early as the middle of the sixteenth century. After the Mexican War of Independence, most of present-day New Mexico became part of Mexico, while the northeastern part belonged to France. This part was bought by the United States in 1803 under the so-called Louisiana Purchase, and after the Mexican-American War, the United States acquired a part belonging to Mexico until then; in 1850, the so-called New Mexico Territory was established, which consisted of today’s Arizona, New Mexico and part of the state of Colorado. New Mexico did not become the official state of the USA until 1912 as the 47th state in a row.

New Mexico is geographically very interesting – there are wide deserts and semi-deserts and high mountains with an altitude of over four thousand meters. The highest point of the state is Wheeler Peak, whose peak is at an altitude of 4013 meters above sea level. The average altitude of the whole state is 1740 meters.

The climate in New Mexico is mostly desert or semi-desert, although there are also areas with an alpine climate. During the summer months, very high temperatures prevail in most parts of the country; average high daily temperatures climb well over 30 degrees Celsius. Winters tend to be relatively short and pleasant; even in winter, the average highest daily temperatures in many cities are higher than 10 degrees and fall below freezing only at night.

Much of New Mexico’s economy is based on the country’s natural wealth – there are deposits of uranium and manganese ore, potash and copper. There is a large presence of the state, which is a major employer here; there are a number of US Air Force bases and other military facilities. The conditions for agriculture here are not very favorable, so cattle breeding in a number of local ranches is more frequent.

The capital of the state of New Mexico is seventy thousand Santa Fe, but the main economic center of the state is Albuquerque with more than half a million residents.

The flag of the state of New Mexico was adopted in 1920.

The Santa Fe area was inhabited by local Indians long before the arrival of Europeans. They began to penetrate here at the end of the 16th century, and in 1610 the Spaniards founded a town here called Santa Fe. The area and the city later came under Mexican rule, no matter how much the Republic of Texas demanded it. After the end of the Mexican-American War, the entire region became part of the United States, and in 1912, New Mexico became the official state of the United States with Santa Fe as its capital.

The climate in Santa Fe has a semi-desert character – winters are cold here, while summers are very hot. In winter, night temperatures drop to -8 degrees Celsius on average, and the average summer temperatures then attack the 30-degree level. Precipitation is significantly below average here; the highest volume falls in the summer months due to the arrival of the North American monsoon.

There are many churches in the city, the archbishop is located here and it is a Roman Catholic center. The main monuments include the Palace of the Governors, which was built in 1610 and houses the State Museum.