What is the capital of New York? 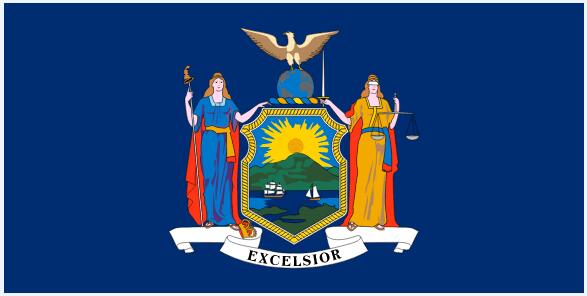 New York State is located in the northeastern part of the United States. It became the official state of the USA in 1788 as the eleventh in a row. In addition to Canada, the state of New York borders five other US states – in the east they are Vermont, Massachusetts and Connecticut , and the southern border shares New York with the states of Pennsylvania and New Jersey. The capital of the state of New York is the city of Albany.

The area of ​​today’s New York was first colonized by the Dutch during the 17th century. In the 1960s, Great Britain took over as a result of the Second Anglo-Dutch War; during the Third Anglo-Dutch War, New York regained Dutch possession, but very briefly. In the American struggle for independence, New York was one of thirteen colonies that revolted against British rule. A number of battles in the ensuing war took place in New York. New York became the official state of the newly formed USA in 1788 after the ratification of the American Constitution.

The eastern part of New York State is dominated by the Great Appalachian Valley, which includes the Great Lake Champlain and the Hudson River. To the west of this lake are a number of other lakes, the most famous of which is probably Lake Placid, as well as the smaller Adirondack Mountains, where the highest point of Mt. Marcy (1629 meters above sea level). While the area around New York City’s largest city is highly urban, the rest of the state is the opposite.

The climate of the state of New York is characterized as a humid continental, which in the south of the state, in the area around New York City, turns to subtropical. Average daily temperatures rise to thirty degrees in summer with considerable humidity, but winters are often very harsh and long, especially further from the coast. In the area around Lake Placid, temperatures drop below zero on average in April.

New York City is the dominant economic, commercial and financial center of the state and the entire USA. The industry has a long tradition throughout the state of New York and is very diversified. At the same time, New York is an important transportation hub for both air and sea transportation. Agriculture is also thriving here, especially fruit and vegetable growing; New York is also one of the most important producers of milk and dairy products in the United States.

The capital of the state is the city of Albany with a population of 100,000, but the clear center is, of course, New York City with more than eight million inhabitants.

The New York State flag was adopted in 1901.

The capital of New York – Albany

The Albany area was colonized by the Dutch in the early 17th century. In 1664, the area came under British rule and the settlement was renamed Albany; it was not formally declared a city until 1686. The state of New York became an official state of the United States in 1788, and until 1797 the Legislative Assembly met in various cities of the state; in 1797, Albany was officially declared the capital of the state of New York.

Historically, Albany had an industrial character, but it has receded in recent decades, and today services predominate and the government has, of course, great influence. Albany also has a number of schools and educational facilities.