What is the capital of South Dakota? 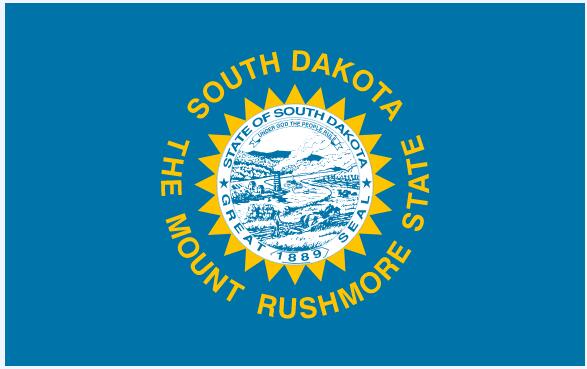 Apart from the original Indian tribes, the French were the first of the imperial powers to move into the territory of present-day South Dakota. The territory came under US rule after the purchase from France in 1803 and definitely after an agreement with the Native Americans in the 1950s. In 1861, the so-called Dakota Territory was created, which included not only today’s South Dakota but also North Dakota and parts of Montana and Wyoming. South Dakota became the official state in November 1889, along with its northern namesake; the territory of the territory was divided into two parts due to the growing population.

The eastern part of South Dakota has a slightly lower altitude than the western part and precipitation is more frequent here. In the southwestern part of the state is the smaller Black Hills with the highest peak at 2207 meters above sea level, which is the highest point in the United States east of the Rocky Mountains.

South Dakota has a continental climate characterized by very warm summers and harsh winters. In summer, daytime temperatures often rise above 30 degrees Celsius, although there is usually a significant drop at night. Winters are very cold when the lowest average temperatures in the winter months fall below -10 degrees.

South Dakota has historically been considered primarily a farming state, and grain growing and cattle breeding continue to be an important part of the state’s economy. South Dakota has been striving for greater economic diversification in recent decades, with services and the financial industry thriving.

The largest city in South Dakota is Sioux Falls with about 150,000 inhabitants. Another important city is Rapid City; the capital is Pierre, a city with only 14,000 inhabitants.

The capital of South Dakota – Pierre

The capital of the state of South Dakota is the city of Pierre. It is located in the central part of the state and has only fourteen thousand inhabitants, which makes it the capital with the second lowest population within the United States.

Pierre is located at an altitude of 442 meters and, as in all of South Dakota, has a continental climate with very warm summers and freezing winters. The warmest months are July and August, when average maximum temperatures rise above 30 degrees Celsius, while in January the lowest average temperatures fall below -12 degrees with extremes to -35 degrees.

The flag of the state of South Dakota was adopted in 1992.