What is the capital of Vermont? 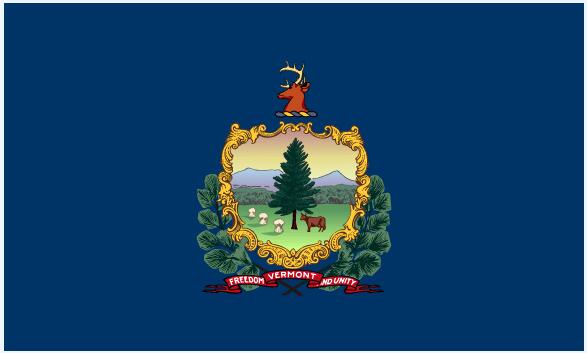 The state of Vermont is the sixth smallest state in the United States and is located in their northeastern part. Vermont became the official state of the USA in 1791 as the fourteenth state in a row. Vermont borders Canada to the north and three U.S. states – New Hampshire to the east, New York to the west, and Massachusetts to the south. The capital of the state of Vermont is the city of Montpelier.

European colonists first appeared on the territory of today’s Vermont in the first half of the 16th century. And it was the French who built the first permanent residence of Fort Lamotte in this area in the 17th century. The British gradually penetrated the region, and disputes over domination over the territory were not resolved until the Seven Years’ War, after which the area came under British rule. The provinces of Massachusetts, New Hampshire and New York claimed the territory, but during the American War of Independence, the independent state of Vermont was created, which was subsequently admitted to the Union in 1791 as the fourteenth state in a row.

Vermont is located in the northeastern United States in a region called New England. Despite its very small area, Vermont is a relatively geographically interesting state – there are several smaller mountains such as the Green Mountains, Taconic Mountains or Granitic Mountains; the highest point of the state is Mount Mansfield with an altitude of 1339 meters. Lake Champlain, the sixth largest freshwater lake in the United States, is located in northwestern Vermont.

The state of Vermont has a humid continental climate with relatively short and mild summers, with the highest daily temperatures averaging around 27 degrees and cold long winters, when temperatures do not rise above freezing even during the day.

Vermont has most of the landscape forested, and due to the small size of the state, there is not much room for growing crops; agriculture has long been the most important production of dairy products. Of the industries, Vermont is particularly successful in mechanical engineering and the manufacture of precision instruments.

The largest city in the state of Vermont is Burlington with about 40,000 inhabitants; however, the capital of the state is eight thousand Montpelier.

The flag of the state of Vermont was adopted in 1923.

The capital of Vermont – Montpelier

The capital of the state of Vermont is the city of Montpelier, which was first settled in 1787 and today has about ten thousand inhabitants, which makes it the smallest capital of all US states.

The area of ​​today’s city of Montpelier was first settled in 1787, thanks to settlers from Massachusetts. One of them was Colonel Jacob Davis, who chose the name Montpelier after the French town of the same name. The settlement grew relatively quickly and gradually turned into a shopping center, especially after the construction of the railway in the mid-19th century. Since 1805, Montpelier has been the capital of the state of Vermont.

The weather in Montpelier is characterized by relatively short and mild summers, when the highest temperatures do not exceed 25 degrees on average. On the contrary, winters are long and relatively harsh, with night temperatures usually falling to -13 degrees on average. Montpelier is surrounded by mountains and has a beautiful view of the highest point in the state of Vermont – Mount Mansfield.